It’s not everyday you get to create change on a national scale.

Today is one of those days.

One of those days which democracy rules… and the power is returned to the people.

Use it well my friends. Today Ireland votes whether or not every adult in the State has the same right to marry the person that they love. The person that they wish to spend their lives with. To commit to the hard work and joys of partnership. And to be recognised and supported by our State – in life, and death. To raise a family through the joys and pains… and be respected for that commitment.

Irrespective of what body parts you were born with.

Or how you chose to use them in the privacy of your own home.

Regardless of who you are… and who holds your heart. 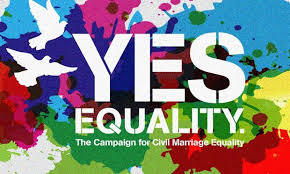 My inquisitive 7 year old said us the other day, after hearing her parents discuss another heated Facebook discussion  between the “yes” and “no” camps.

“But it’s got nothing to do with you. It’s up to gay people to decide if they want to marry or not. Why should you be voting, it doesn’t make any difference to you.”

I am not a destructive person. But the No campaign has made my blood boil. Not only on behalf of the gay and lesbian families in Ireland, but also the widowed families, the single mothers… and fathers. 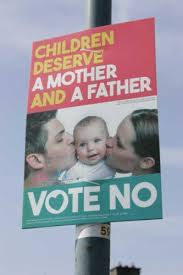 I have considered many times going out and defacing… or redecorating their hurtful posters. But I respect the freedom of speech… and the right for a difference of opinion.

I have steered clear of very heated Facebook exchanges, because the two sides are entrenched – trying to use reason to explain what is deep in their hearts. I have steered clear… but now I know how I want to dive in… not with reasoned words… but art, from the heart.

My favourite No campaign poster is the one which says:

Vote for Freedom of Conscience.

I wholeheartedly agree. That is what you should vote for… and I’m not quite sure why it supports the No campaign – because straight people are not going to be press-ganged into gay marriage if it passes… so vote for freedom of conscience.

Rainbow colours, social change, love, acceptance and sex… it’s what Dreaming Aloud is all about.

It came to me as I was art journaling my voting card, that #CreateChange is definitely going to be a driving force for this blog. Encouraging creative souls to put their skills to work in making social and cultural change more beautiful, engaging and accessible. Creating change with scissors, paint and glue, with vision, love and hope in our hearts…

It’s what the artists at LitFest did too… I am so happy that we get to vote for this… sad that it should even be an issue… and hopeful that when my own children realise who they love, it will be a non-issue.

Somewhere over a rainbow… equality lies… and we’re getting closer every day.

Today is a big day. Let’s create change… Join us on the hashtag on Instagram and Twitter. #CreateChange