We are totally addicted to Masterchef in this house – a TV cooking show where the contestants are pushed to the limits of endurance, before having their dishes picked apart by the odd couple of Michel Roux Jr, and Fat-Boy-who-the-fuck-is-he-anyway-Greg-Wallace.

But I always say, that to really test them they should chuck in one kid having a tantrum, another trying to “help'”, a pig sty kitchen, a third child destroying everything they do and then see how much they can cook!

So today I took that challenge upon myself. Yup. Nutter!

If I were a cruel “perfect life” blogger I’d show you a cutesy finished picture, which you would promptly pin on Pinterest and go away hating me. But I’m not, so instead I shall regale you with the reality behind a “happy family time” making a real gingerbread house, in order to reassure you of my enduring lunacy, and why NOT making Christmas memories together is the sane loving thing to do!!

It all started with a 4 year old who came home from school and tantrumed long and hard. Hot on the heels of a 2 year old tantrum. The 4 year old ordered a chocolate bar, the fire put out, hit her sister, the sitting room to herself to watch TV, her shoes put back on (after having kicked over her sister’s bowl of mushroom soup). He brother went and started banging his head on the door in anger and frustration, having spent the past hour lighting the fire. And also because it meant we couldn’t make candles over the fire like I’d promised.

So I uttered those infamous words: let’s make a gingerbread house. We’ve made one every year four the past four years. They are always a festive and semi fun way to destroy the house and achieve multiple arguments.

So we started. Me and the boy. It wasn’t long before middle child smelt fun she was missing out on and abandoned CBeebies. Cue fight over whether or not she deserved to join in and forced apologies for having been a little so-and-so.

Rolling out one part gingerbread with one part glitter from earlier “Christmas card making session”. Can’t find the rolling pin, so we use the cling film roll!

Guesstimate the house parts. Bake. Make caramel. Don’t burn it. Assemble house – snapping off the bits that don’t fit. It doesn’t collapse like usual. Very chuffed. Haven’t even burnt myself!!! 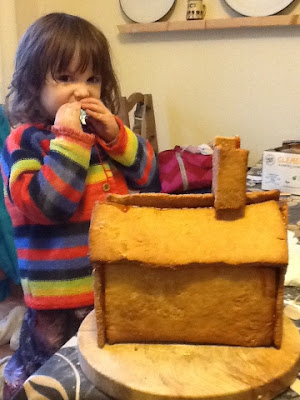 I start to get cocky and make a sugar work cage of spun sugar. Michel Roux Jr would be proud. Burn my finger on the last drop of caramel. Fuck it. 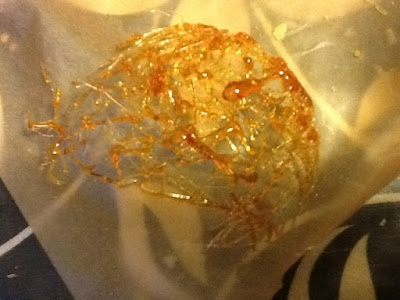 Girls come racing past for the second time. It is then that I realise that the youngest is chucking Hobnob biscuits out of the packet at her older sister whilst chasing her round the house. Her older sister was retaliating with a pot of blue glitter. I kid you not. And the cleaner was here only 24 hours ago. 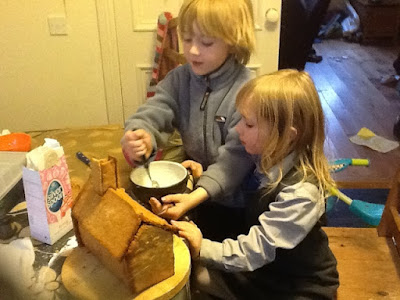 Boy makes icing. Littlest girl adds way to much water. We do a fine job of decorating it together. No one dies. Look at our handy work! 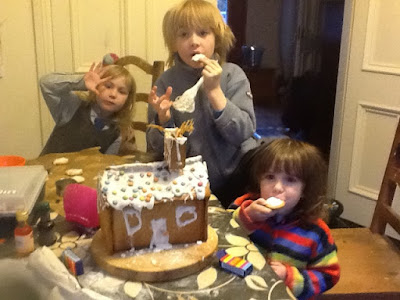 And look at the fucking mess! 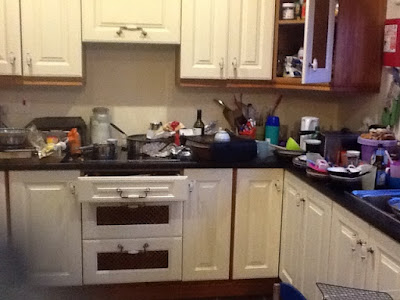 Now I have to cook dinner!
For inspiration on Christmas crafting with friends and family, see my popular post from last year: Craft-Tea Christmas celebrations.
Share