“The community you want starts at your front door”
Neighbour Day, Australia

We have just past our first anniversary of living in the Pink House. And along with boxes still to unpack we have many neighbours yet to meet.

You see, unlike my mama, I am not a knock-on-people’s-doors-and-learn-their-life-story kinda girl. I get all wriggly in my tummy and think I might puke if I have to say more than hello. 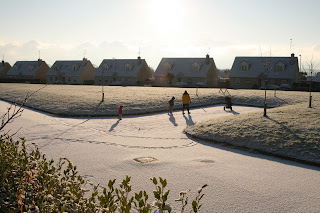 So I annoy myself hugely by having a deep rooted “community” urge. If I have a moment on my hands I find myself organising sandsculpting events, or women’s circles, or writing groups, or arts festivals. I really don’t know why, but I have this strong, “let’s get together and stop ignoring each other and make this a fun and doodle dandy place to live full of happy faces and fun stuff to do…”

I have always wanted to live in a “community”. You know the type, lots of long haired hippies, a communal garden, shared creative/ yoga space and bringing up the kids together.
A combination of lack of land, planning permission and cash in our group mean that instead we are living on a housing estate in a small Catholic village. We have the ties of the local school to bind us, but not the local sport or religious practice.

My dear friend Mary said to me the other day “My life is so much richer for knowing you Lucy cos you’re always getting us caught up in your next mad project!”

So my latest mad project, which I urge you, dear reader to join me in, now we are friends, is “The Big Lunch”. Brain child of one of my favourite impossible doers – the visionary behind the Eden Project in Cornwall (a complex of vast geodesic greenhouse bubbles which house a rainforest and others eco systems in a disused quarry in the south of England).

The Big Lunch is all about bringing communities together through eating together… On Sunday June 5th thousands of communities, hundreds of thousands of neighbours will be eating together in parks, on their streets, in gardens festooned with bunting, playing street cricket, making music… I feel that the best way to build family resilience, is to be deeply rooted in our geographic communities, which we will be relying on more and more in future years.

Community is at the heart of resilience. If your car breaks down or the power’s out, or you need some milk, or to use a phone, your nearest neighbours are those you need to be able to call on. So many of us do not even know the name of the people who live two doors down. We drive miles to see friends. Of course there is little chance that everyone on our street are going to be our best friends. But there might be more like minded people, allies, companions, human beings, behind those closed doors than we realise. As oil prices rise and wages fall, we will be living closer to home. Soon gone will be the days of empty commuter estates.

Because of our hyper-mobile society, we now find ourselves living in newly built housing estates like ours, or apartment blocks, villages and towns surrounded by strangers. It feels instinctively unnatural, and leads to defensiveness. Which we experienced soon arrived our arrival here, when a neighbour popped by to yell at us about suing and insurance because his son had injured himself playing on a digger bucket which was being used by our contractors but left for a couple of hours on common land. What a wonderful introduction to the neighbourhood.


And so it was with trepidation that I put together an invitation to each of the 19 other houses on our estate. We delivered them by hand, my kiddies delighted to play postman, and we managed to avoid small talk with any of our neighbours we are so longing to meet!!!! and then we retreated to our little Pink House to wonder what the response would be, and what the gossip would be! So we shall wait and see… thankfully one neighbour, whose kids are friendly with ours, dropped by to say it was a lovely idea and that they were wanting to organise something similar but had never gotten round to it. Phew, so we won’t be sitting by ourselves on our picnic rug come Big Lunch day… I wonder who else will join us…I’ll let you know!


The Big Lunch is a UK based event, however there are Australian, American, Canadian and Irish versions of “Know Your Neighbour” type events.

http://www.thebiglunch.com in the UK (June 5th)which is the brain child of the indomitable Tim Smitt, creator of the extraordinary and visionary Eden Project in Cornwall
http://www.neighbourday.org/ in Australia and New Zealand (late March)
Know your neighbor weekend in Ireland (late July)
http://www.european-neighbours-day.com/ on the last Tuesday of May, celebrates its 10th anniversary this year. In 2010, over 10 million people in about 1200 towns hosted gatherings all over Europe and even further.Neighbours’ Day has become a major event in more than 30  countries
National Good Neighbor Day in the US- September 28th