Once in a while magic happens. This seems to happen more often than one would expect at Ballymaloe Cookery School. Which is great for us, because we live just next door. I LOVE that! 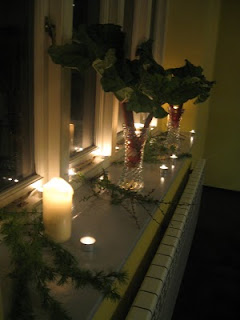 A lesson which life has taught me is: when you spot something special, do not to let it slip through your fingers, grab it while you can. So when I spotted the homemade poster on the door of the Cookery School shop last week advertising Gill’s Garden Supper Club,“a new dining experience” happening at the Cookery School this weekend, I knew I had to go!

Pop-up restaurants and supper clubs are ideas of our time. I first saw supper clubs mentioned on TV last year on Jamie does America. They were all the rage in London and New York, where wannabe chefs who didn’t want the overheads and bureaucratic hassle of opening a restaurant would instead host dinners at their homes to paying customers. Customers raved about the sense of community which added to the experience, rather than having your own anonymous table in a carefully packaged restaurant.

It seems that a poster made and printed on a home computer, sellotaped to the door of the Cookery School Shop, and a Facebook page are all that are needed in this day and age if you have the skills and support to try your hand at a running restaurant. We texted our reservation five days before the big night (how 21st century!) and were lucky to get the penultimate table.

It was also to be the first meal out we have had sans kiddies since… well actually we couldn’t remember when, but certainly since Baby Ash joined us a year ago! We love eating out. We live for good food. We have had more than our share. For two years running whilst we lived in London, my father gave us a meal out a month – my goodness did we have some good food. So we despair of eating out in most places around here.

We later discovered that my sister was one of the waitresses for the evening, and my step mother and brother had also booked a table, so it was quite a family affair, rather than a romantic night for two, tant pis!

Our chef-patron for the evening was Gillian Hegarty who currently teaches at the Cookery School and previously cooked at much-celebrated River Cafe in London, for Rose Gray and Ruth Rodgers.The influence of all three chef-mentors was apparent on the menu. To add intrigue to the evening, the local, seasonal (of course!) four course set menu is revealed when you arrive. 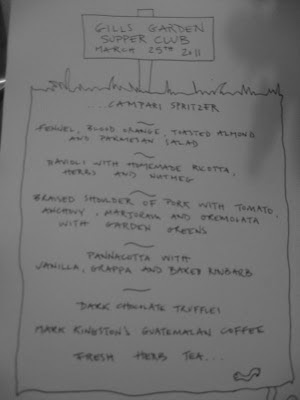 We were greeted and seated with a bitter campari and cava spritzer, which we all, being previous campari haters, were surprised to find higly enjoyable. Except my brother (17) who apparently “doesn’t drink”… except, he informed us, for beer-u, oh and vino, oh yes and the occasional whiskey, and vodka, and absinthe!

And we finally got to see our menu – and what a menu it was – like poetry to my bored-of-Irish-restaurant-staples eyes: a classic Italian menu of anti-pasta, pasta, meat and dessert – made with the best of Irish local produce – hurray for Gill!

The room was magicked up with hundreds of sparkling nightlights, and monumental stems of rhubarb in crystal vases, and little vases of grape hyancinths  – a veritable twinkly magical indoor garden! The flowers, like the food and service struck the right balance of formal and informal, and the bubbles had got us in the mood…

The bread arrived, ripped out of my sisters hands. And oh what bread.  A wonderfully chewy sour dough, served with olive oil to dip. We rhapsodised over it. THIS is bread! Bread to eat with cheese, with Nutella, as bruschetta, our hungry fantasies tumbled out. 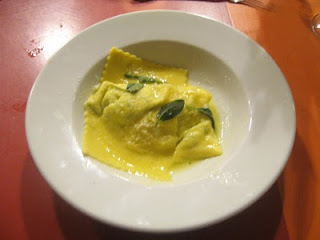 Another ten minutes and starters arrived, a refreshingly astringent spring salad of crisp fennel, juicy blood oranges and rather redundant toasted almonds and parmesan. From here on in the food, timing and service were faultless and smooth. No first night jitters here. Then came ravioli, pillows of fresh egg pasta stuffed with light homemade ricotta and aromatic herbs, topped with fried sage leaves in butter. Supreme. I would have had seconds and thirds and fourths…

The meat course was an achingly tender braised shoulder of pork with tomato, anchovy and a zingy gremolata. Served with the first of the sprouting broccoli, and swiss chard from the Cookery School glasshouses. The pork was smoky and savoury, highlighted by the gremolata. But no carbs, in the Italian mode, (according to my step mum who’s lived there for 10 years.) Hubby and I were having a shared fantasy about a creamy pomme puree. We requested more bread to soak up the juices. But then a large bowl of seconds was offered, and gratefully received (and later regretted!) Followed by an unannounced salad of feisty winter greens. Proper salad – a bit tanniny for me – but great to have real salad, not the floppy hydroponically reared bland baby leaves you find in most restaurants.

This being March, the menu being Italian, dessert was, as I had predicted, pannacota, quivering and virginal, freckled generously with vanilla seeds, and annointed (to my dismay) with grappa. This was accompanied by faultlessly baked rhubarb with orange zest. I’ve done mushy rhubarb and rubbery pannacota enough times to know that this aint easy.

Locally roasted coffee, fresh herb tea and sexy dark chocolate truffles followed, but at 10.15pm, a little later than we had wanted to be still eating. And I had to disappear before they arrived as baba had woken – booo!

I love when people have creative ideas, take risks, follow their dreams and do it with style. So hats off to Gillian – we’re behind you all the way. We LOVE having County Cork’s best restaurant just 10 minutes walk from our front door.

This was food as it should be, cooked with panache. It has set a new gold standard for what restuarants can and should be doing with local produce. At €35 a head, it was exceedingly good value for money (when’s the last time you could say that about eating out in Ireland?) We cannot wait to go back… I have a feeling we might have to fight for a table!