IS THIS IT? I wrote in my journal a few weeks back, after weeks of being housebound with a sick family and icy roads. Endless cooking, cleaning, tidying, more tidying and yet more tidying with little other distraction had taken their toll. I’M A $@*#£! HOUSEWIFE!

I have nothing against housewives: I just never intended to be one. For good reason: I am a TERRIBLE housewife (see here and here). I cultivate cobwebs and laundry mountains in my home with as great success as the courgettes and coriander I grow in my garden. I try to breathe mindfully whilst I do “my duties”, rather than fuming against my family, my husband and biology. I would not class my domestic skills (except cooking) anywhere in my top twenty of “things I’m good at”. They don’t come naturally. I don’t enjoy them. In fact, often I feel like I would rather gnaw off my own arm than empty the dishwasher or tidy the toys for the umpteenth time today. 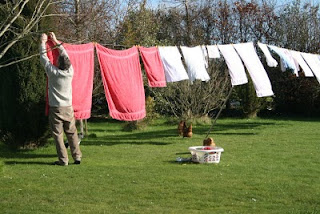 A brief history of housewives
Housewives, argue Hayes in Radical Homemakers, are an aberration of our consumer culture. According to her“the household did not become the ‘woman’s sphere’ until the industrial revolution.”  Housewife and husband were related terms. Husband meaning bonded to his own house, rather than to a lord. In the past men and women shared a home based life with a division of labour according to tradition and skills passed down over generations. Men doing leather work, chopping wood, butchering animals, threshing, fire making, woodworking. Women would play their part childrearing, cooking, preserving, tending kitchen gardens, healing. Domestic work was valued, requiring skill, creativity and ingenuity, and was satisfying. But economics changed this, first drawing men, then women out of the home. No longer would home be a place of family, food production, education, work and leisure – instead all of these functions were externalised, and bought, requiring money, and thus further work outside the home, and round the circle goes.

One of the key texts which Shannon Hayes’ Radical Homemakers refers to for her historical analysis of the development of domestic life in America is Betty Friedan’s seminal text The Feminine Mystique (1963).

She documented the loss of potential, the depression, boredom and bewilderment of post-war American housewives, and spoke of  ‘the problem that has no name’. Her words hit the American psyche deep, helping to spark the second wave of feminism in the 70s, and sending women out to work, and away from their homes, in droves.

“Before long, the second family income was no longer an option. In the minds of many it was a necessity. Homemaking, like eating organic foods, seemed a luxury to be enjoyed only by those wives whose husbands garnered substantial earnings…At the other extreme homemaking was seen as the realm of the ultra-subjugated, where women accepted the role of servants to their husbands and children….” (Radical Homemakers)

I remember clearly reading The Feminine Mystique at university, as part of my self appointed women’s studies. I may have been studying a degree, but also found myself doing far more than my fair share of housework. My head may have been full of feminist furore, but my heart was heavy with the knowledge that my ovarian ownership meant that our culture would expect the domestic sphere to be mine, especially if I were to ‘opt’ (for me it is not a choice, but a pre-requisite) to ‘stay home’ (it’s WORK people, just not paid!) with my children for their early years. I had put so much of my time and being into attaining top academic achievements through to graduate level, I was not prepared to give up my creativity or life of the mind to keep house. Nor was I prepared to sacrifice my deep soul need for a homemade home and loved family and kitchen garden for a glittering career and loadsa money.

This was deeply problematic for me, because on the one hand I have the anti-tidy gene and on the other I am deeply attracted to self sufficiency. I have always aspired to a home based life: cooking, preserving, growing my own veg and sewing simple bits for my home. It was reading Radical Homemakers that finally balanced these two aspects for me. When the reader is ready, the book comes along! Hayes’ book gave me the confidence boost I needed: I am not a struggling, failed housewife. I am just an over-whelmed Radical Homemaker with three very young children.
Enter our life, which many of our friends share too, which I had always struggled to pin down. Yes, on the census form we are “housewives” but in reality we, and our partners with “job titles” are so much more. The lives we lead so much richer and diverse than any existing definition. Before reading Radical Homemakers I had no word for what we were, no framework for what we were trying to achieve. It felt so slippery, that when I wasn’t “achieving” it and feeling miserable I found it so difficult to articulate why. This book has given me terminology.
Firstly the term homemaker, which for me had always been a slightly awkward Americanism, suddenly made more sense. The distinction between a housewife and homemaker is an important one. Whilst Americans have moved over to the term homemaker in common parlance, in the UK and Ireland we have tended to stick with housewife. Housewife connotes both a woman, in her role as wife, therefore in relation to her husband, not her own person. And also wedded to her house, an object, a possession of status. Whereas homemaker is firstly gender non-specific and secondly speaks not merely of an economic asset, but a place of primal belonging: a home.
So what is a radical homemaker? According to Hayes it is: “someone who wasn’t ruled by our consumer culture, who embodied a strong ecological ethic, who held genuine power in the household, who was living a full, creative, challenging and socially contributory life….These families did not see their homes as a refuge from the world. Rather each home was the centre for social change, the starting point from which a better life would ripple out for everyone.”
Yup, that’s us! Perhaps it’s you too? Or perhaps it’s what you aspire to?
But what is this framework of values and practices that radical homemakers, young and old, rural and urban seem to share? Come back later in the week to find out!